For the majority of my time alive, wrestling has been one of my loves in life. Family, girlfriend, friends and football (in particular Glasgow Rangers) are the only things to top what goes on in the squared circle. My cousins, Gary and Derek, being a few years older than me, exhibited the same passion for the sport, and shared this with myself, through the art of powerbombing me onto couches. I would say I missed those days, but it was just last week they were both spearing me into a ball pit at Gary‘s daughters 6th birthday.

One of my earliest memories of wrestling was watching a certain PPV with them on VHS in 1998 in our nannies house. That PPV being the 1998 King of the Ring. My appreciation for what Mankind and Undertaker put themselves through inside that Hell in a Cell that night wouldn’t grew until I reached my teens. The lasting image I took from that show was of a bold Texan, smeared in blood doing what it takes to remain the best in the industry. That man was Stone Cold Steve Austin, my first icon in wrestling. 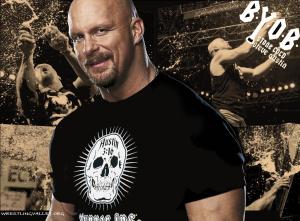 The next three years produced some very happy times. Every Friday night, my mum would let me stay up late to watch Raw on Sky Sports, back before they showed it live on a Monday. I would never go to sleep unless I heard that smashing glass of Stone Cold’s music. The way the crowd reacted to his presence was just unreal to me. That pop he got the night Mankind won the WWF title still gives me goosebumps to this day. In a time where everyone wanted to be like David Beckham, I wanted to be Austin. Everything he did, from the high quality matches he produced, to the fact that he always got one up on the boss really stuck with me. The only in wrestling at the time that was even close to gripping me at that same stage was Sting, but since he was on the enemy show, it just wasn’t the same (that Crow theme entrance though – just wow!!). I do, however, look back on this time in my childhood and wish that my saddest memory was losing a family pet, or breaking my bike. For me, though, it was that night at Wrestlemania 17 where Stone Cold turned heel and joined forces with Vince McMahon, or as it felt like in my head, Batman joining up with Joker. I can admit I did cry when that moment took place, and for years, I couldn’t idealise a wrestler the same way. 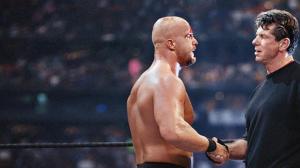 As I progressed into high school, I grew to understand the entire landscape of wrestling much more, and with that, began to appreciate to true greatness of superstars I had ignored in the past. Back in the attitude era, The Undertaker was a scary dude to me. The way he rolled his eyes into the back of his head and his haunting image gave me some rough nights. Now, my respect for him grows year by year, truly starting around the time the streak got noticed. My first wrestling DVD purchase was a look back into the Phenoms career, and whilst watching that, his adaptability became obvious to me. The gimmick would get no where if it came about these years, but Taker made it work, growing with the changes in time. Even his time as the American Badass was just right for the time, as was when he went back to being the Deadman. Plus, 21-1 at the grand daddy of them all, Wrestlemania, speaks for itself. A locker room leader, a future Hall of Famer, and for a big man, he could get top drawer matches out of a plant pot. I still get excited when he competes at Mania even now. 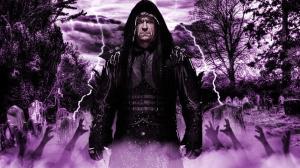 My start off in wrestling came just after Shawn Michaels unfortunate retirement through injury. I knew him simply as that annoying commissioner who showed up occasionally in those stupid shorts (short shorts, really Shawn!!?). It wasn’t until 2002, I got my proper introduction to the show stopper. Over a spell of 2/3 years, it really hit me, this guy doesn’t know how to have a bad match. It prompted me to dive into the archives to see more. What a pioneer of the sport Shawn was. From being in the first ladder match, to the leader of DX, to that night in Montreal in 97 (if you don’t know what night I’m talking about, just get off this blog), Michaels has done it all. 7 straight match of the years, and one was against Vince, he is a true in ring genius. These three men really are my wrestling heroes. 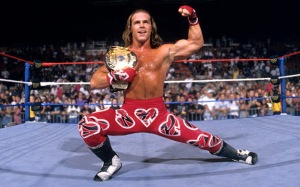 After hitting childhood, my extended my knowledge into the history of WWE, to see who inspired others in the past. Before Austin, there was Bret Hart. Before Hart, there was Sting and Warrior. Before them, there was Flair and Hogan. Going back further, there was Sammartino. In the present day, the current WWE universe get excited for guys like Cena, Orton, and Lesnar. Diehards get off their seats at the sound of the music of Triple H, The Rock, and Edge, and dream for a day where a Kurt Angle or a Jeff Hardy return to the WWE. These men have inspired many to love wrestling as much as I do. Over the next decade, young fans will love guys like Rollins, Ambrose, Owens, Neville, Balor, Zayn, Wyatt and Reigns, just as much as I loved, and still do love to this day, Stone Cold. He is my wrestling hero, who is yours?? 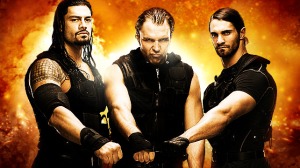 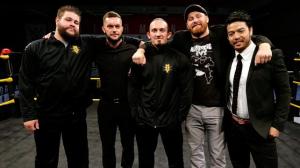 Last week, the wrestling world lost a true icon, one man who inspired many of these great superstars, past and present, as well as helping to usher in the next generation. Dusty Rhodes was a true living legend. In the past, only one wrestler death really hit me hard emotionally, that being Eddie Guerrero, until I heard of Dusty’s passing. This post is dedicated to the American Dream, his great career and life. RIP Dusty. May you be hitting bionic elbows wherever you may be. 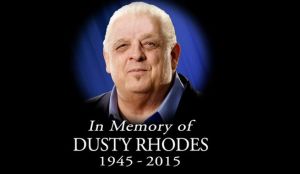 The founding father and ‘higher power’ of the ESSR army, Steven oversees the operation of the Suplex Retweet podcast series and is the show’s primary host.  With a broad knowledge of the industry, Steven leads discussions on a wide range of subjects from stables to WCW.

For some reason, he thinks John Cena’s real name is Allen Jones and is madly in love with Becky Lynch.

6 thoughts on “Why I love wrestling – Icons of Wrestling”

Eat Sleep Suplex Retweet
Welcome to the home of Eat Sleep Suplex Retweet, a wrestling podcast out of Scotland, U.K. Through our team of knowledgeable fans of the industry, we bring you the best of all things wrestling, from the heights of WWE to Glasgow's own Insane Championship Wrestling. Some wrestling pods may just do previews and reviews, but here, we aim to produce analysis of a number of topics, whilst also providing a whole bunch of laughs and banter. Follow us on Facebook, Twitter and Instagram @SuplexRetweet.
Download
Share on facebook twitter linkedin email
Royal Rumble MVPs
by Suplex Retweet

We discuss some superstars who over the years of the Royal Rumble have really shun and created memorable moments and created legendary stats. Subscribe now for future shows and interviews. Join in the chat on Facebook. Instagram and Twitter @SuplexRetweet

Wild night so far over at @FFemalesGlasgow! The semi finalists in the title tournament have been named. Head on over to Fierce Female’s snapchat (Fiercefemale12) to catch all the action! ❤️

It’s hilarious. Give it a listen 😂

With #ICWSquareGo a week away, @sgrieve91 &
@MrKwakuAdjei do a watch a long of @InsaneChampWres Square Go 2. Hear them react to watching it for the first time from @ICWonDemand! Available on Spotify, Apple and Android podcast sites! #AlbaGuGraps 🏴󠁧󠁢󠁳󠁣󠁴󠁿

With #ICWSquareGo a week away, @sgrieve91 &
@MrKwakuAdjei do a watch a long of @InsaneChampWres Square Go 2. Hear them react to watching it for the first time from @ICWonDemand! Available on Spotify, Apple and Android podcast sites! #AlbaGuGraps 🏴󠁧󠁢󠁳󠁣󠁴󠁿

Watching #WorldsCollide tonight? Then check out our preview of the battle between @WWENXT and @NXTUK over on our Suplex Retweet Extra feed

Time to stir up the pot a bit, who’s winning the #FierceFemales Tournament and walking out as Champion?

https://open.spotify.com/episode/6LvPwP7VaucOg1oy8uLJhN
.@MclucasAllan joins .@scottmcleod1996 as Season 3 draws to a close. They talk the importance of getting points at #RoyalRumble and give some important info for season 4.

In the latest Suplex & Binge, @StevenW1192 and @_JackGraham pick out their favourite characters from the US Office

Some of their picks may shock you. Available on our Suplex Retweet Extra feed @theofficenbc @officeladiespod

Tonight @StevenW1192 and @_JackGraham will be recording the latest Suplex & Binge, where they will be discussing their favourite character from @theofficenbc

Which Dunder Mifflin employees did you enjoy the most? #theusoffice #TheOffice